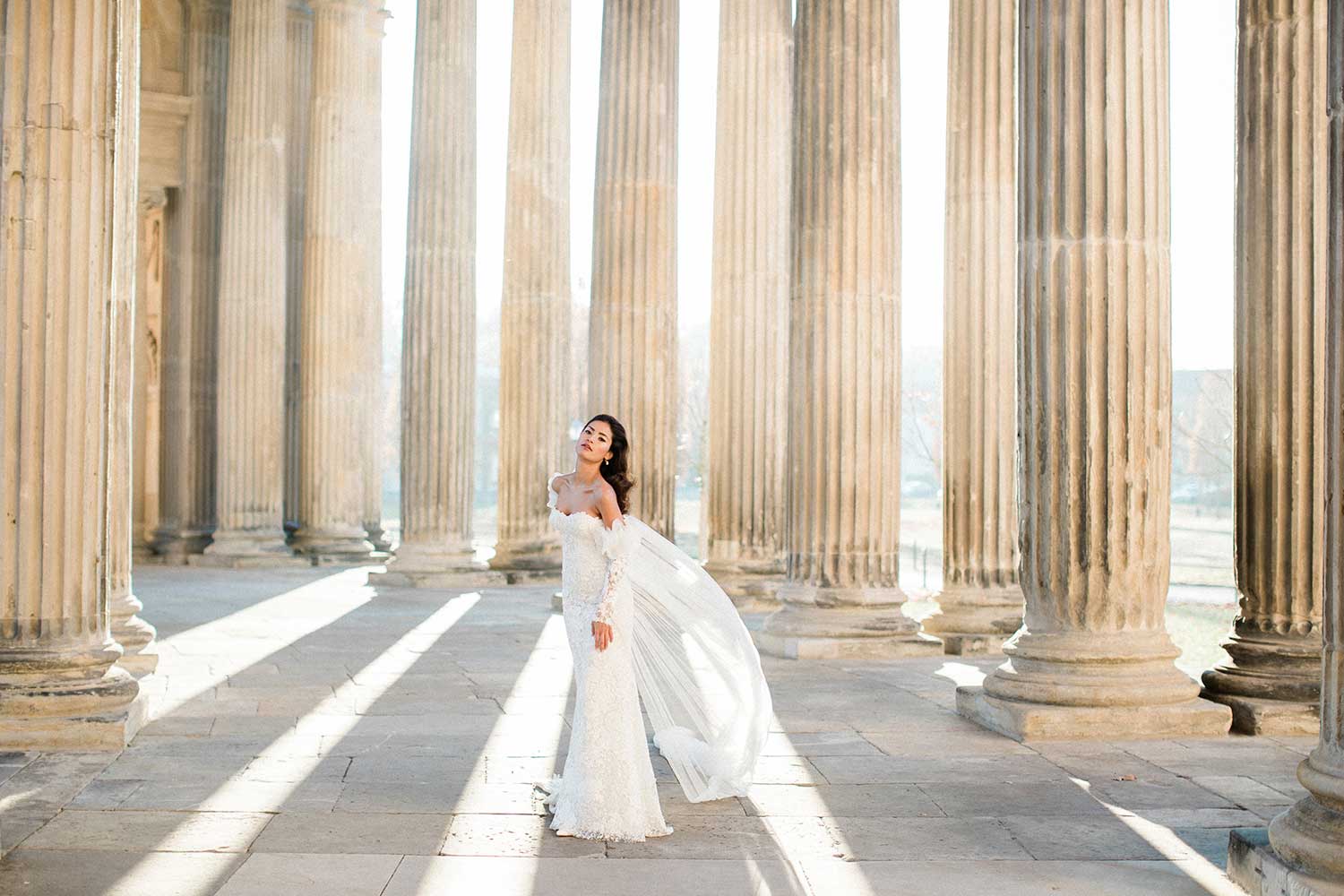 Potsdam, the capital of the German state of Brandenburg is one of the most popular destinations. A great location with a charming view and a rich history and because of that Potsdam is worth visiting.  Picturesque, romantic, pretty and full of nature, a film editorial photoshoot in Potsdam is perfect.

The gorgeous model was German, Camile. This is one of the most special photoshoots that I have ever done. Why? Because I shooted film. Shooting film editorial in Potsdam is a special experience for every wedding photographer.  Most importantly with this photoshoot, I wanted to challenge myself.  I rented a medium format film camera. Wanting to shoot with wedding dresses, therefore, I chose a white wedding dress with tulle wings by Pronovia. I wanted to see how the white color would look captured by medium format camera. Being cold, the wind would play with the wings of the dress and I could capture gorgeous shots.
Potsdam was the chosen location as I wanted to see the contrast between the brown columns and the white wedding dress.

The differences between digital and film

I was used to real-life weddings when everything moves too fast. Also, you have to be agile to capture every moment. Medium format camera doesn’t give you this opportunity. Medium format film requires more time to think about the pose, the place, the light because all you get is one shot. After the shot, you can’t see what you have captured. This is scary but exciting at the same time.  Therefore the image is only in your mind. Medium format film has the opportunity to make the photos look timeless, natural, intimate and romantic. Most importantly both digital and film capture the right moment. Once the moment it’s gone you can never bring it back again. After finishing the photoshoot, Carmencita Film based in Spain was the lab I chose to deliver the photos and I received a high quality scanned film.

Something different about shooting film editorial in Potsdam

The emotions and the satisfaction you get by shooting film are extraordinary. This format makes you feel a lot. The anxious moments before seeing what you have captured made this experience frightening, fun and artistic. The higher resolution that medium format offers is one of the biggest advantages, BUT I think that the digital cameras can give the same results if the wedding photographer has imagination and creativity.
Experience, knowledge, skills, and love are essential requirements to shoot film. Even when I shoot with a digital camera I act towards it like I’m shooting film, like I only have one shot, one opportunity. The important thing about both digital and film is to capture the right moment.
Every moment is unique.